Peering out of the drafty, second floor window at the cobblestone below, I watch uncertain, as fashionable couples and men of industry pass by the entrance to my newly leased establishment on the corner of Broadway and John Street.  The running glass pane through which I gaze out onto the street scene distorts their appearance as if I was looking at them with the eyes of an intemperant.

All through the late fall and remaining days of 1839, I had studied and experimented with the equipment and chemicals I had purchased on credit from my friend and scientific instrument maker, Mr. Roach.  I mention the terms of my acquiring the materials as I have no shame in admitting that during that time, and in fact on many occasions over the course of my career, divinity had determined that I should go without more often than live in materialistic abundance.

I have never once questioned my creator.  In my deepest moments of doubt, I ask for the strength and wherewithal, nothing more save for the health of those I hold dearest to me.  The why of it is most certainly beyond my comprehension.  I suppose this small gift of humility has allowed me to focus more on overcoming the matter at hand and not the circumstances surrounding it, which I believe pleases Him.

All that winter leading into the new year I had practiced at our home on Hamerseley Street.  It was our first on Manhattan.  A small little cottage on what has now come to be called West Houston, we hadn't the room really, what with our extended and seemingly ever growing family!  Ben was a curious and omnipresent toddler and little Mattie a beautiful little angel.  Although she never once complained, I saw the price my study was exacting on my dear Phebe Ann.  I commited myself to removing the enterprise to a proper address as soon as even the most modest of successful attempts at putting means to the method could be made.

Only moments earlier, I had stood on a low stool at the doorway leading up to my atelier, hanging what would be my first means of promoting myself as a daguerreotypist.  Unsure of what in fact I should actually call this altogether new form of portraiture and not wanting to confuse the public with my name being associated with something other than my jewelry and watch repair establishment on Maiden Lane, I decided to simply shutter a small wooden framed sample of four of my best specimens to date.

They were four small quarter plate affairs.  So tiny and fragile.  I hung them with all the care I had within me.  Faint, quiet images of neighbors and acquaintances, as I recall now.  Mr. Stoutenburgh, my landlord was one of them.  He was a grain merchant who had rented his home to us as a wedding gift principaly on behalf of my father, who had a long and friendly business relationship with him.  Mr. Adolphus Lane was certainly among them, a very good and kind gentleman.  He ran a prominent dry goods store next door to my jewelry shoppe on Maiden Lane.

Now, my new neighbors stood behind me, skepticaly looking over my shoulder as I affixed the tiny placard by way of several lengths of chain to the doorway's ceiling, other than the images, a tiny ceramic finger directing the curious upstairs.  I stood down from the step and gave consideration to my efforts.

"Well done, Mr. Gurney!"  "Yes indeed, sir!  We are pleased to count you among our mercantile partners!"  I acknowledge Messrs. Booth and Bagley's warm words with great thanks but confide in them, my ambivalence.  They nod and all three of us look pensively to the small wooden sign that serves to announce my new line of business.

J.C. Booth was one of early New York's great habardashers.  A tailor by trade but over the years his business at 187 Broadway grew into all matters of gentlemen's furnishings.  It was Mr. Booth whom I gathered my initial recognition of a merchant's need to market himself in the worst of times as much as the best.  While I believed in newspaper and directory advertising and promotion from early on, it was only when I began my career in daguerreian photography that I learned the beneficial results of proper marketing.

Mr. Bagley was one of several gentleman who's business was within the building I chose to call my first studio at no. 189 Broadway.  A manufacturer and retailer of ornate, handcrafted gold and silver pens, he, like Mr. Booth served to please only society's best clientele. 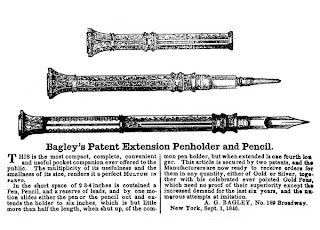 Both men approached the sign for closer inspection, coatless, bracing themselves against the cold January morning, teeth chattering a bit.  I on the otherhand felt little of the temperature, more concerned with my situation and whether or not I had taken leave of my senses for considering such an unknown future.  I took solace in knowing my little shop around the corner on Maiden Lane was still in operation, though the hours I had spent honing my portraiture business had in fact begun to take it's toll on the ledgers of my jewelry and watch repair work.

"So, Mr. Gurney, once again please, tell me..."  Mr. Booth was saying over his shoulder while both he and Mr. Bagley were angling themselves vis-a-vis the small oval shaped daguerreotypes to better capture their views.  "They are sun portraits, Mr. Booth.  The amalgam of science and art, sir.  Mr. Morse brought the process back from Paris last year."  Bagley uttered an exclamation "indeed!  Here, Booth, if you look at this one just...like so..."  Both of the gentleman let out a gasp of recognition and with agreeable nods to each other turned to me and smiled.  "Fascinating, Gurney", says Booth.  "What do you charge to...paint...them?"

It was only at that moment that the subject of fee was broached!  In all my haste to release my dear wife and family from the bondage of my preoccupation with the science of all this, I had completely neglected the fundamental aspect of my business plan!  Here before me stood two men who for all appearances had established themselves in the most important city in the world and here I was before them with no idea what I was intending to request for my services rendered!

The fear and confusion I had felt over the past months immediately compounded itself to such a point where I thought I would in fact, faint or worse yet, die of a cerebral apoplexy here on lower Broadway.  Both of these men stood with their arms enfolded about themselves, hair blowing to the wind, lips blue from the cold, watching me.  It was then that Mr. A.G. Bagley spoke.

"Well Mr. Gurney, I would very much like to make an appointment with you at your earliest convenience, to have my visage put to...canvas?  If $5.00 is agreeable to you, we have ourselves an appointment!"  Mr. Booth looked on at me for a moment before uttering "yes that does sound reasonable, put me on your calendar as well, Mr. Gurney.  Now gentleman if you will excuse me, I'm frozen thru and would like nothing more than the warmth of my coat and the chime of my pocket watch announcing the beginning of our business day!"

And on that frigid morning, had I looked up into the second floor windows of my neighbor Mr. Booth's establishment at 187 Broadway, I might have seen a young jewel case manufacturer peering out at what had just transpired below.  Returning back to his work bench, thoughts of his own future flooded into the mind of Mathew Brady.

J. Gurney
My name is Jeremiah Gurney and I am 83 years old. I was born in Coeymans, NY in 1812. I am currently semi-retired from the photographic arts industry, living here in Coxsackie with my daughter Martha.