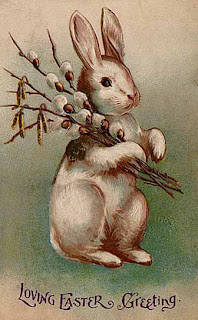 An Easter card arrived today from my dear daughter-in-law Sarah and my loving grand daughter Gracie!  Such thoughtful, wonderful women!  And after all each have been through to still think of their father-in-law and grandpa.  I am truly blessed.

She is the daughter of one of Manhattan's great early merchants, our Sarah is.  In my earliest days of living down state, Charles S. Benson was as much a benefactor to Phebe and I and our little family as he was to become a very close friend and mercantile colleague.  Mr. Benson had begun what would be a long, well established and succesfull career as a grocer and dry goods provider at very much the same time we arrived and I began working in the jewelry and watch repair business.  As I've already indicated, there was many a time when I had little or no money in my possesion.  It was Mr. Benson who extended his helping hand to make certain there was at the very least, food on our table.

Over time, our two family's grew to become quite close and, much like that of my Mattie and John Faris, love blossomed between Ben and Mr. Benson's beautiful daughter Sarah.  On a warm June afternoon in 1860, the two were married.  As a wedding gift and as a sign of my approval for how far he had come in my firm, I announced to one and all that the establishment of J. Gurney would hence be known as J. Gurney & Son.  I don't think anyone who attended the lovely ceremony that day had any thought as to how both marriage and firm would unravel.

Since my bringing him on board three years prior, Ben had proved himself admirably.  He was, to a fault, an eager student and an industrious employee.  Initially, I know it hurt his sense of pride when I insisted he come on in the most menial of capacities.  However, I believed he had put this perceived slight behind him quickly enough and embraced the opportunity to learn and grow which is precisely what did happen.

With my instruction in the science and art of the business along with those of such great photographers as my friend Fredricks, the Pearsall brothers and others in my employ, Ben became an accomplished operator in his own right.  To his credit, he was one of the principals in the enlargement of the carte de visite to that of his very own "Imperial" size portraits which enjoyed a brief run of popularity before cabinet cards came along.

While his photographic skills were certainly accomplished, what Ben began to enjoy the most and what would ultimately cause so much heartbreak to all was the notoriety and the unlimited access to all the city had to offer.  His appetite for both began innocently enough and while concerned, I did indulge him.  He was a young man, newly married and well on his way to a level of success that may some day eclipse my own, I argued with myself.  I must let him make his own decisions.  Still, my concern was never entirely abated.  Even in this seemingly happy time.

J. Gurney
My name is Jeremiah Gurney and I am 83 years old. I was born in Coeymans, NY in 1812. I am currently semi-retired from the photographic arts industry, living here in Coxsackie with my daughter Martha.